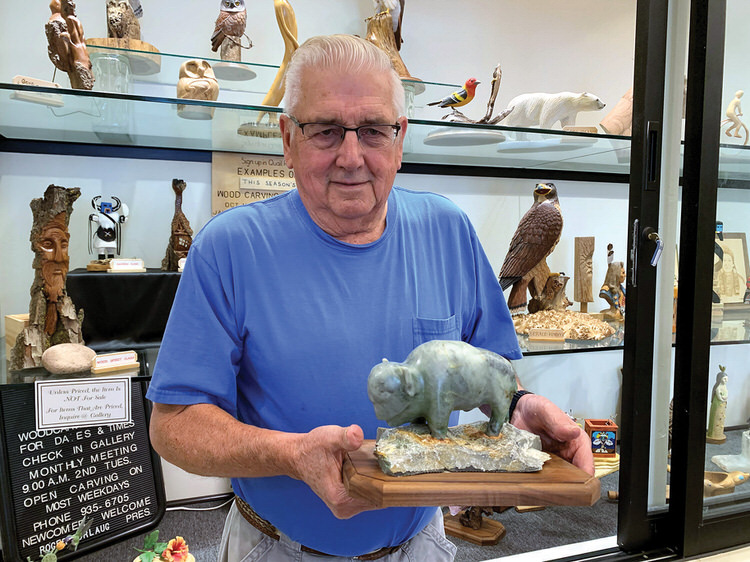 The PebbleCreek Woodcarvers Club is offering a series of stone carving classes in February 2023. David Linth and Don Smith have been teaching the art of carving soapstone and other soft stones for several years in the Quail Room at the Creative Arts Center. David Linth commented that he became excited about the idea of bringing stone carving to PebbleCreek while traveling through Alaska and seeing soapstone art.

While stone carving is similar to woodcarving, stone is a “different experience.” Soapstone is very soft but very dense. Soapstone weighs 160 pounds per cubic foot and is almost two times heavier than concrete. As an example, a 4” x 6” x 8” piece of soapstone weighs about 15 pounds.

What is wonderful about carving soapstone is that it is smooth, soft, easy to work with, and is a “tactile experience.” Carvers will fall in love with the feel of the stone when carving. Carvers will use knives, files, scrappers, and sandpapers. The surprise is in the polishing phase. David said, “Soapstone is a delightful grab bag of colors. You never know what you will get until you polish it. The polished piece could be a variety of creams, light blues, greens, and browns.”

David and Don source soapstone in British Columbia. Some stone is imported from Brazil, Argentina, India, as well as from the United States. Carvers can purchase stone from David or Don and will be given a list of hand tools that will be used in the class. There is no cost for the class except for supplies and stone cutting fee.

If you are interested in learning more about the PebbleCreek Woodcarving Club, stop in the Quail Room located in the Creative Arts Center. Most of the club members had never carved before walking in the door. The club offers free beginners classes in early 2023. There might be hidden talent just waiting to be discovered. Come on in!