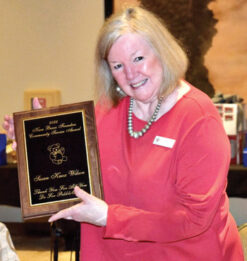 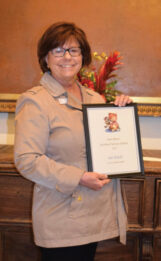 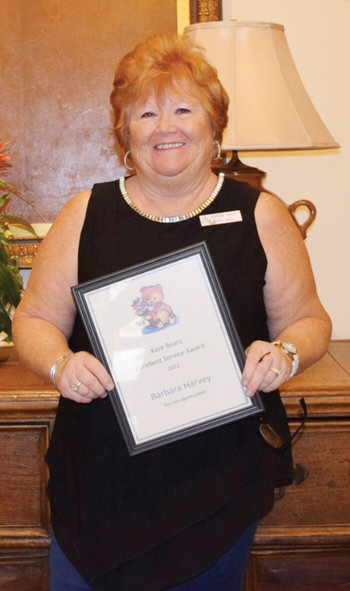 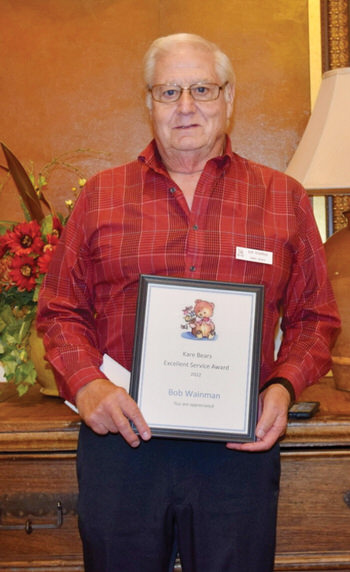 On Nov. 9, 2022, Kare Bears held their Annual Awards Fall Luncheon. Although it was only the 25th luncheon, it has been 27 years since Kare Bears began. We have come a long way through the years and it could not have happened without resident ideas, volunteerism, and donations, both equipment and monetary. How lucky we are to have a community of “Neighbors Helping Neighbors.”

The theme of the luncheon was Denim and Diamonds, and it described the sparkling smiles as the 250 attendees submitted their tickets for the raffle, made a bid on an auction item, or participated in the 50/50 drawing.

Kare Bears is indebted to those who helped plan, organize, and fund this event and make it a huge success. A special thank you goes out to Barbara Harvey, Chairperson, and her committee members. The musical entertainment was provided by the Desert Harmony Trio. Last, but not least, we want to thank the donors of the gifts for the raffle and auction.

The first award was given to Jill Romo, Director of Sales and Marketing, and Lance Williams, Executive Director. They were presented the Friends of Kare Bears award on behalf of Robson Reserve, who was given the award for its substantial monetary donations and support.

Bob Wainman received his award for cleaning and repair of medical equipment since 2019.

Barbara Harvey is a dedicated office volunteer and made this luncheon happen by chairing the committee.

Linda Glazar has been the driver coordinator since 2012. She handles all the paperwork involved when a resident volunteers to be a driver and much more. She also puts together all the new-resident packets.

Laurel Prom is a Unit Coordinator and an office volunteer. She is also in charge of ordering supplies for the Kare Bears house and is chairing the committee to distribute the 2023 PebbleCreek Source Books.

The top honor at every awards luncheon is called the Founder’s Community Service Award. It is in honor of the Kare Bears founder, Rayma Scalzo. It is bestowed annually upon a resident who has provided distinctive leadership and service as a volunteer in the PebbleCreek Community. This year we selected Susan Knox Wilson, who has used her marketing and communication skills to better PebbleCreek. Here are just a few of the things she has done: been an election committee specialist for marketing/communication since 2018, a PC communication team writer since 2015, the PC TV manager for four years, and member of the HOA transition advisory group. She led unit 43B to successfully reduce water consumption over $1 million in less than one year.

The luncheon was a huge success. Hope to see you next year!