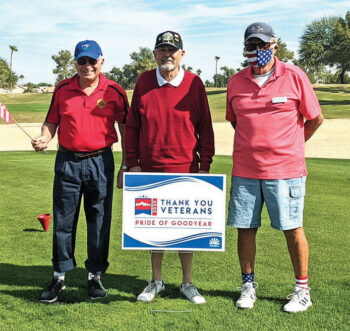 On Nov. 12, the PCM9GA Golfing Niners held a Veterans Day tournament at the recently opened Eagle’s Nest course. The event was scheduled so that we could remember and offer our thanks to all veterans who have served our country and sacrificed so much to keep us safe.

Several PCMGA members took turns offering their personal thanks to other veterans as each group teed off that afternoon. All members were presented a United States flag enameled lapel pin as a memento of the day. Most golfers dressed up in their best red, white, and blue. PCM9GA is committed to making this an annual event on the golfing calendar. We must never forget!

Originally called Armistice Day, President Woodrow Wilson spoke to the American public on Nov. 11, 1919. Wilson said, “A year ago today our enemies laid down their arms in accordance with an armistice which rendered them impotent to renew hostilities, and gave to the world an assured opportunity to reconstruct its shattered order and to work out in peace a new and juster set of international relations.” While subsequent presidents remembered the day, it wasn’t until 1938 that Congress made it an official holiday—a day to be dedicated to the cause of world peace and to be thereafter celebrated and known as Armistice Day.

In 1954, the wording was amended and Armistice Day was changed to Veterans Day, honoring all men and women who have served our country.

The 11th hour of the 11th day in the 11th month will always be a time to remember and honor those who served.

The following golfers were the winners of our Veterans Day tournament. A unique format, scoring was the two low net middle scores in the foursome.