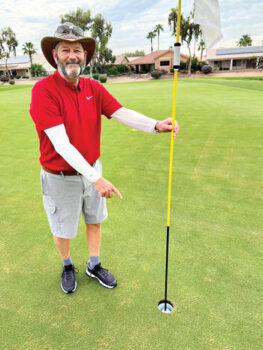 Tim Niccum points to the result of his great shot.

On Sept. 22, Tim Niccum made a hole-in-one on the 17th hole of the Eagle’s Nest course. He made this perfect shot while playing in a Pebble Creek Men’s Golf Association (PCMGA) regular Thursday men’s golf event. As such, Tim now qualifies to share in the annual hole-in-one prize along with Tom Sandgren and Mike Christensen.

The 17th hole was playing 125 yards from the white tees with a left side middle-pin position. Tim hit his 7-hybrid with a high trajectory straight at the pin. It landed about 4 feet in front of the hole, bounced, and then struck the flag pole head on making a loud but happy noise. At the same exact time, Tim and one of his playing partners, Alan (R) Peterson yelled, “That went in”! Tim checked the green with his rangefinder and saw no ball thereby confirming his fantastic shot was indeed a hole-in-one. Tim’s other playing partners, Steve Dehaven and Kirk Harrison, joined in the celebration with whooping, hollering, high-fives, and fist pumps. They said, “We’re thirsty!” After the round Tim bought drinks for whoever was in the clubhouse at the time.

This was Tim’s second hole-in-one in 35 years of playing golf. His first one came in 2002 while playing with his son at the Honeywell Golf Course in Wabash, Ind.

Tim was born and raised in Wabash living on his family’s farm. On their 640 acre farm they grew corn, beans, and wheat, as well as raised show hogs. The farm was initially purchased by his grandfather in 1941. In addition to farming, Tim also served on the Wabash Fire Department for more than 26 years. He finished out his career there as Fire Chief. Thank you for your service!

Tim retired in 2006 and moved to Buckeye, Ariz., with his wife, Dr. Sheri Niccum. Sheri was a general practitioner. Tim and Sheri moved to PebbleCreek in 2015.

Congrats on this awesome shot!