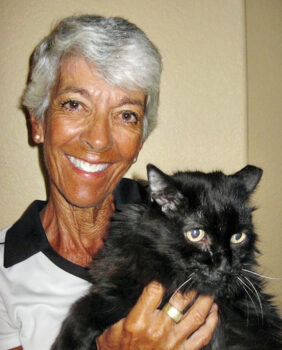 JoAnne Terry is PebbleCreek’s tennis player of the month.

If you saw JoAnne Terry on the tennis court, and most of us have, you’d expect her past to include high school tennis, college tennis, and USTA team play. That would all be wrong. Actually, being a wife, mother, and flight attendant for 43 years got in the way of devoting any serious amount of time to tennis.

In the early 1970s, JoAnne had just begun learning the game of tennis and was practicing hitting against a backboard when a “handsome gentleman” asked her, “Would you like to hit some?” She usually refused these approaches, however, this time she agreed. A year later, JoAnne and Dean were married. They lived in Northern California for 25 years while they raised their two boys, Shane and Josh.

In 2004, JoAnne and Dean were looking at retirement communities in California when they came to visit their son Shane, who was training at Luke Air Force Base. While visiting and before they knew it, they purchased a lot in PebbleCreek and were having a home built. When they moved to PebbleCreek, JoAnne was working international flights, which required three to seven days away, so her tennis was limited to hitting baseline to baseline with Dean. In August 2010, Dean passed away unexpectedly. After 36 years of marriage, this was a very difficult time for JoAnne, and she credits her sister Judy (Jude) and the PebbleCreek tennis community for getting her through her loss. She also knows that “Coach Dean” would want her on the court playing tennis.

If you’ve met JoAnne, the last thing you’d expect from her is “trash talk,” at least on the tennis court. Off the court, she can talk some real trash! She and her sister Jude have adopted several streets in Goodyear, and can be seen riding their bikes around Goodyear and PebbleCreek picking up trash and keeping our community beautiful.

JoAnne started a kitty sitting business, Boo Bear Kitty Care, and has established a regular clientele. She also volunteers as an usher at the Goodyear Ballpark during Spring Training.

Kind, strong, and community minded are just some of the adjectives that describe JoAnne Terry. However, for those of us in the PebbleCreek tennis community, she is one of the nicest people you will ever meet. That is why JoAnne is our Tennis Player of the Month.