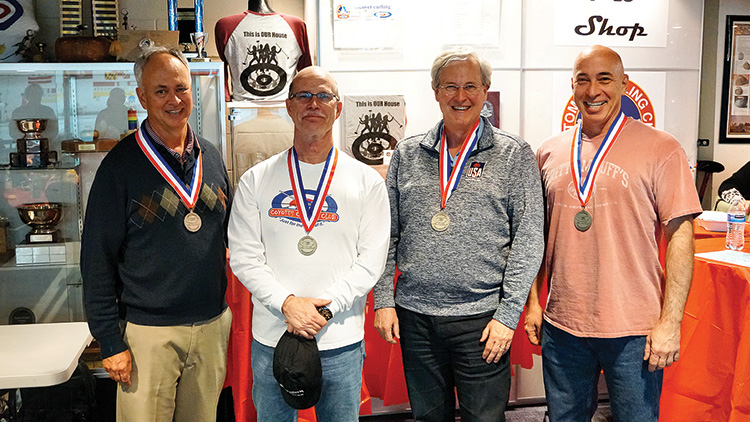 Bob’s team competed against ten teams from all over the USA. The first stage was to play a round-robin where each team played every other team once. In this stage, Bob’s team tied for second with a record of 6-3 which qualified them for the semi-finals, a one-game, sudden death playoff.

In the other semi, Team LeClair led New Jersey 6-4 going into the last end. It came down to the two skips in a test of skill and nerve. Four throws determined the winner. NJ threw first and the skip added a second closer stone for a possible two points. Bob knocked out one NJ stone and got closer, so instead of giving up two points, he was getting one. With an amazing last throw by NJ, the skip knocked away Bob’s stone, got two closer, and had some other stones in front for protection. Bob was then faced with a possible tie score that would force another end. With all the skill he could muster and with great sweeping by his teammates, Bob curled one closer to take a point to reach the finals.

The finals were somewhat anticlimactic for Team LeClair as Colorado continued their dominating undefeated performance to take the gold medal with a score of 7-3.

To qualify for Nationals, Team LeClair won their local qualifier in early December 2019 and then proceeded to Regionals. Twelve teams from California, Arizona, Utah, Oregon, and Nevada competed in the Mountain/Pacific Regionals in Beaverton Dec. 18-22. They won Regionals with a record of 7-0, their second year in a row to reach Nationals.

For those of you who are unfamiliar with curling, a four-person team competes against another four-person team made up of a lead, a 2nd, a 3rd, and finally a skip. They deliver (throw) two stones (aka rocks) each and in that exact order across the ice to a house (three concentric circles with the button at the center). Two sweepers brush the ice in order to modify the distance and direction of the stone. Each player alternates with their opponent. So, a total of 16 stones are delivered in what is known as an end. All curling stones weigh 42 pounds and come from the same place, the Ailsa Craig in Scotland (just across the water from Turnberry Golf Club).

Scoring in curling is similar to bocce. After all 16 stones are thrown, the team’s stone closest to the button scores a point. If additional stones for that team are also closer to the button than their opponent, additional points are scored. Highest score after all ends are complete wins.

Congratulations to Bob and his team on their terrific performance!