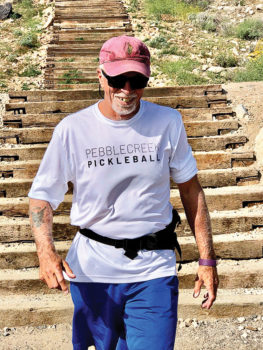 Members of the PebbleCreek Pickleball Club have come up with many ideas for raising money for the new pickleball courts. One member, Bill Plesha, created a stair challenge. Bill challenged himself to walk up and down the Verrado Stairs as many times as possible. The Verrado Stairs consist of 331 steps that were created out of railroad ties near Tiger Mountain and next to the Victory Community.

Bill solicited his fellow pickleball players and had commitments from 45 PC Pickleball Club members along with his sister and a friend. Bill’s goal was to collect a penny for each stair that he climbed.

Bill had climbed the Verrado Stairs before for a total of six trips; each trip is once up and down the stairs. His fundraising goal was to climb the stairs eight times. On Feb. 21, Bill, supported by his wife Lynn, began his challenge on the Verrado Stairs. Bill said, “I managed to do ten trips this time! That means a total of 3,310 stairs with a total elevation gain of close to 2,000 feet. By doing the stair challenge, I raised a total of $2,055.70 from my 47 sponsors for the new PebbleCreek pickleball courts.” Thanks, Bill, for your contribution and high-stepping idea.