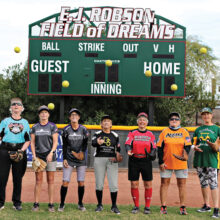 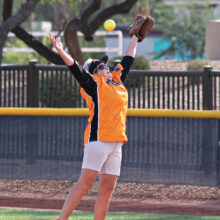 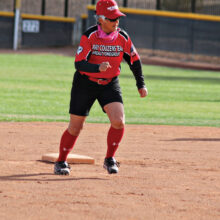 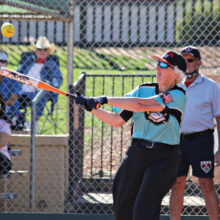 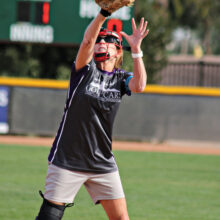 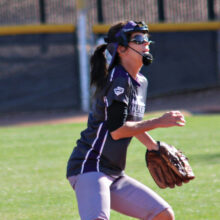 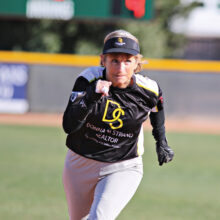 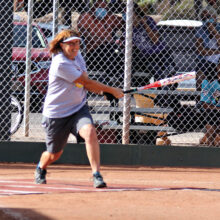 From October through April, seven extraordinary PebbleCreek women suit up, grab a mitt, and bring their competitive spirit and love for softball to the Robson Field of Dreams. These high energy athletes are members of the PebbleCreek Senior Softball Association (PCSSA). Dawn Hangen is the president for the 2020-21 season and the first woman to hold this position.

At age nine, Dawn started playing softball as a fast-pitch pitcher. She was a quarterback for a Girls Athletic Association flag football team, a ski instructor, a member of the Montana National Guard marathon team, and a triathlon competitor.

Martha Urbin is known for being a fast runner and has been known to beat out the throw to first base. Her experience is traced back to elementary school. Martha commented, “Being so close to the ground, I was a quick basketball dribbler and could move the ball down the floor. I led the school in steals but could not get the ball into the basket!”

Theresa Meyers was voted the first female to be named Outstanding Athlete of the Year in her senior year of high school. While she was in nursing school and active duty Air Force, she played intramural softball. Theresa commented, “I just really enjoy practicing and playing softball and feel very fortunate to be able to participate with all the guys.”

At age 10, Sandra Kraft played softball for the Sugar and Spice League. She said, “I was forever hooked after that. I went on to play whenever I could.” During her career at Amoco/BP, Sandra played in company co-ed leagues and in other local sports leagues. Sandra commented, “Winning was never important to me; playing the game is all I have ever wanted to do.”

Lori Adair took a different path. Though she didn’t play sports in high school or college, she played soccer and softball recreationally as an adult and is making up for lost time. Said of her speed getting to the base, “I could never hit the ball very hard so I learned to run real fast!”

Shari Brink was the fastest female runner in high school, competing in the 50, 100, and 440-yard relay. She played competitive ladies softball and in soccer leagues and played with several international players in the Premier Division. Shari is a prankster, loves a good laugh, and because she is filled with surgical screws and plates from sports injuries, she is known as the Bionic Woman.

Sherri Kuk started playing softball when she was 10 and continued on through college. She and husband “Cookie” won the co-ed Nebraska State Softball Tournament together. Sherri’s a Zumba and fitness instructor and commented, “I still play pickleball, volleyball, golf, and bowl when I can. I love the camaraderie of all the players. Everyone is always fun to be around.”

Kudos to the seven women who live out their dream playing softball at the Robson Field of Dreams. (Photos by Doug Adair)

Items of note that have missed the print deadline may appear here.