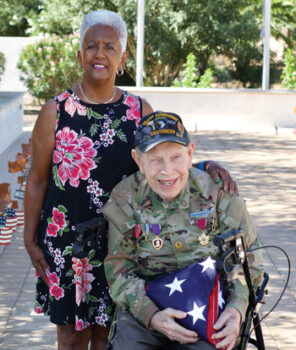 Last month, Roberta Medina approached a member of the Activities Office staff stating her intention to donate a full set of flags to the Armed Forces Plaza. Her donation was accompanied by the following note.

The Armed Forces Plaza of PebbleCreek is a place that is dedicated to men and women who have served in honor of their country with service and sacrifice. Robert Medina and his wife Roberta moved here 26 years ago. PebbleCreek is close to Luke AFB, and was just newly built. The Medinas were living in Hawaii at the time, and they wanted to put roots down on the mainland, so PebbleCreek seemed like the perfect fit. This year, they are planning to relocate to Pasadena, which is Roberta’s hometown. Robert wanted to give back to the community before the move. He decided to leave this community with a set of new flags for the Plaza. These flags representing each branch of our military and the American flag will be the parting gift of remembrance as the Medinas move to California.

We hope that all of the friends and neighbors who visit PebbleCreek Armed Forces Plaza will appreciate these flags that fly in honor of all our service members and veterans.