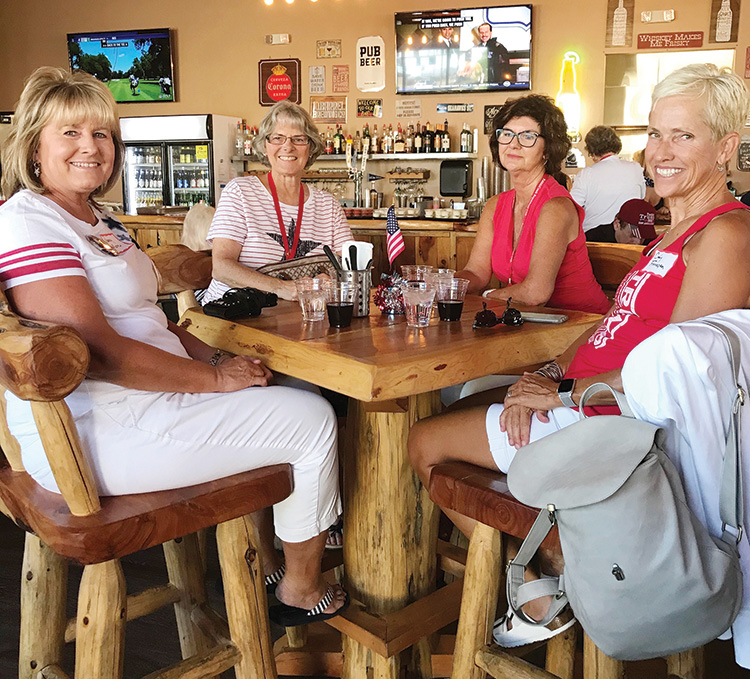 Nancy Moore, Cindy Zaklan, Jodie Heinz, and Cindy Finnegan seated at one of the many high tops in the pub.

On June 14, members of the PebbleCreek Republican Club celebrated Flag Day, President Trump’s birthday, and the United States Army’s 245th birthday. This patriotic event was held at N-Dub Pizza Pub in Goodyear and was decorated in our nation’s colors—red, white, and blue—with flags everywhere. Vice President Sue Harrison began with a prayer. AZ LD13 Representative Tim Dunn led us in the Pledge of Allegiance.

Six Army veterans were recognized, including Trey Terry (candidate) and members Jim DeCarlo, Frank Castillo, George Branfuhr, Kurt Junge, and Chuck Streeter. Their tables were first in line for the delicious buffet of wings, salads, seven kinds of pizza, and a homemade mac-n-cheese served by the staff. Our club proudly salutes our community’s Army veterans on their 245th Birthday, and thanks them for their service.

The PebbleCreek Republican Club provides an environment for Republican fellowship and discussion and to serve as an educational forum for Republican ideas and principles. Due to gathering restrictions in PebbleCreek’s facilities, monthly meetings that are usually held in the Tuscany Falls Ballroom are on hold. If you are interested in joining the club, contact Linda Kesselman, membership chair, at [email protected]