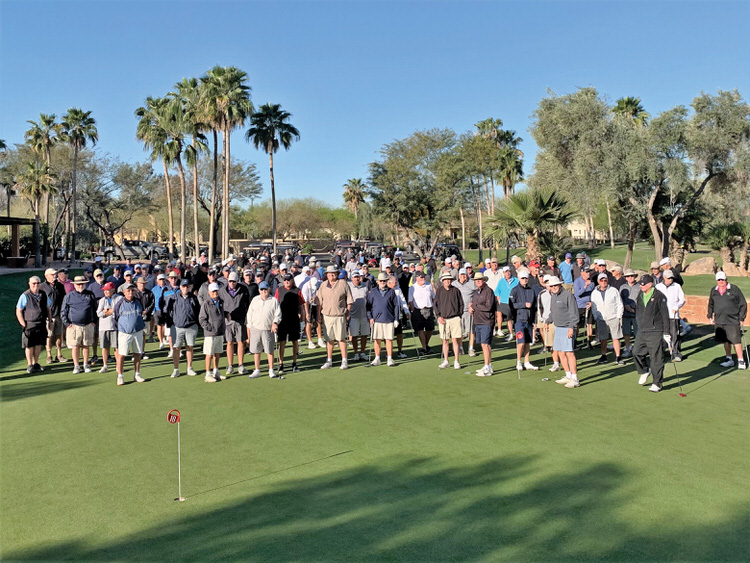 On Thursday, March 24, the PebbleCreek Men’s Golf Association (PCMGA) held a fundraising tournament, with proceeds going to Make-A-Wish Arizona. The event raised $5,225 for this awesome charity. Private donations were also made using a webpage set up specifically for this event. Private donations as of this writing amounted to $1,627, making the total donated $6,852.

A total of 52 four-man teams competed in this charity event, which was played using both courses at Tuscany Falls. The format was a scramble with a two-drive minimum for each player. All players teed off on the White tees for their first hole. Then the score made on each hole determined which tee was used for the next hole. Birdie or better goes to blue, par goes to white, and bogey or worse goes to red. Flights 1 and 2 played the West course and Flights 3 and 4 played the East course.

After golf, players gathered in the Tuscany ballroom for beer and camaraderie. Winners were announced. A “representative” check was presented to Kelly McKeever, external events coordinator for Make-A-Wish Arizona. During Kelly’s acceptance speech, a motion was made by one of the players (Ed Bobigian) to also donate all of the players’ winnings. The motion was seconded and passed unanimously to a loud roar of applause!

The mission of the Make-A-Wish Foundation is to create life-changing wishes for children with critical illnesses. The children they serve are fighting for their lives, and their families are doing everything that they can to help them in their battles. A wish is something that gives kids the opportunity to look outside their illness. It restores a sense of childhood back to the child and normalcy back to the family. Research shows wishes can help improve a child’s quality of life and produce better health outcomes.

FYI, Make-A-Wish started right here in Arizona back in 1980. For those who would like to donate to this terrific organization, you can go to the special webpage designed for the PCMGA. The website can be found at site.wish.org/goto/PCMGA.

Thanks so much to the PCMGA members who participated in this event, as well as private donors, to support this worthy cause.