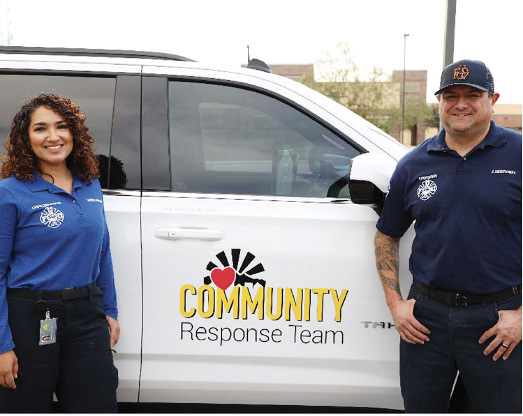 When an emergency happens, police and fire are ready to help, but people are often left on their own to deal with a wide array of situations during the aftermath, often not knowing where to turn for help.

However, several PebbleCreek residents have already been helped soon after the city of Goodyear launched a new Community Response Team (CRT) program, designed specifically to help those in the wake of a crisis.

“One of the things that we often don’t think about are the families who are left behind in those situations. That’s really the goal of the Community Response Team, to ensure we’re providing the support that those families need,” said Goodyear Fire Chief Paul Luizzi.

While Goodyear’s police and fire departments respond to the immediate emergency at hand, this special team’s members can provide longer-term support for residents impacted by the crisis. That includes providing temporary shelter and toiletry needs for residents whose home may have been damaged by a fire, and financial and mental-health resources for residents coping with the sudden loss of a loved one. The team is also able to provide community paramedicine support to customers who need that service. The Community Response Team is an all-encompassing service that can help the community in a variety of ways.

Examples include helping residents during a cardiac arrest episode when the CRT members were included in the initial fire department/emergency response dispatch and provided family support, etc.

The CRT team members have also helped in many other medical and trauma calls, including accidents, falls, dementia, and people in need of social and medical resources.

The Community Response Team is led by Goodyear crisis coordinator Sandra Lerma-Espinoza and Goodyear firefighter and paramedic Joe Hernandez. The program is run through the city’s 911 system and already averages one call per day. Lerma-Espinosa has a master’s in social work (MSW), is a counselor, and has a background in crisis management. Hernandez has been a firefighter/paramedic for more than 20 years.

The unit is currently up and running 40 hours a week. It is the hope that this unit will eventually be available 24/7.

“The effect has been immediate, and it’s been very positive,” said Goodyear police officer Hawkins Mann. “It ties everything together in terms of the services we provide through the police department and fire department.”

“City Council has always been very supportive of our efforts to provide the highest level of service to our citizens,” Luizzi said. “This is a very exciting endeavor that we’re taking on. It provides another level of support for our residents.”

If you are experiencing a medical emergency, please call 911.

If you would like to obtain more information about CR 181, call the Goodyear Fire Department administrative office at 623-932-2300.