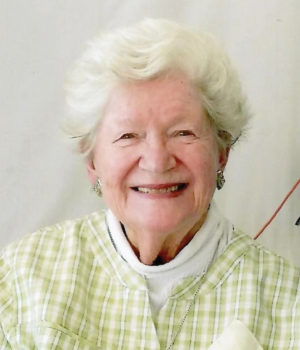 Marilynn Louise Smith, age 89 of Goodyear, AZ died April 9, 2019, surrounded by her family and friends. She was born April 13, 1929 in Topeka, KS, the oldest of two daughters to Owen and Alma (Tillmans) Smith. Marilynn grew up in Wichita, KS with a love of baseball and a dream of becoming a pitcher for the St. Louis Cardinals. At the age of ten, after pitching a particularly hard loss, Marilynn’s mother asked her how her game had gone. Frustrated, Marilynn threw her glove against the wall and let out a four-letter word. That evening her father decided that his daughter needed to play a more lady-like sport and she was introduced to golf.

Marilynn was a natural at golf. Encouraged by her father and well taught by Mike Mura, the head golf pro at Wichita Country Club, Marilynn was well prepared when she was accepted at the University of Kansas and began competing. Denied funding from the school because she wasn’t a boy, her father helped her travel to tournaments. She captured the Kansas State Amateur title from 1946-48 and won the 1949 Women’s National Intercollegiate Golf Tournament. That win was a catalyst and she immediately turned pro. She signed a one-year contract with Spalding for $5000 to play in tournaments, promote golf and present up to 100 clinics a year. It would be the first of 27 one-year contracts that she would sign with Spalding.

Marilynn founded the LPGA with 12 others in 1950. She was president of the LPGA from 1958 to 1960. She won the first of her 21 championship victories at the 1954 Fort Wayne Open. Her last victory was at the 1972 Pabst Ladies Classic. She collected two major championships, the 1963 Titleholders, where she beat the great Mickey Wright by one stroke in an 18-hole playoff and successfully defended that title in 1964. In 1973, she became the first woman to work a PGA event as a television broadcaster. She was inducted into the World Golf Hall of Fame in 2006.

As much as Marilynn prized golf, she loved and appreciated those that she encountered through the sport even more. She was gracious and kind to the fans and sports writers. She was inspiring and encouraging to the players. She traveled throughout the world promoting golf, inspiring generations of golfers and fans alike and making friends wherever she went. Her celebrity allowed her to meet five sitting presidents and play golf with her idols, Stan Musial and Ben Hogan. She used her celebrity to ensure that women had the opportunity and the funding that they needed to pursue their athletic dreams. She created the Marilynn Smith LPGA Charity Pro-Am, which for the last ten years has raised scholarship money to help female golfers with college expenses.

Marilynn’s family swells with pride at her accomplishments. To her nieces and nephews, she is affectionately known as “Auntie M.”.= They loved spending time with her as she would take them with her to various tournaments. Their greatest desire is to continue to grow the scholarship that Marilynn created.

Marilynn is survived by her sister, Gay Pappas and her husband Clifford; niece, Michele Pappas Alexander (Keith) and her family, Dustin Alexander, Ryan Alexander and Caitlin Alexander and nephew, Pete Leahy, and his family, Michael Leahy and Zachary Leahy. She was preceded in death by her parents, Owen and Alma Smith and Marilynn Pappas Leahy.

A funeral service was held on Saturday, April 13, 2019, at Thompson Funeral Chapel, 926 S. Litchfield Road, Goodyear, AZ 85338. Burial was in the Topeka Cemetery in Topeka, KS. The family suggests that donations be made to The Marilynn Smith Scholarship Fund, https://www.girlsgolf.org/donate-foundation. Condolences for the family may be left at www.ThompsonFuneralChapel.com.