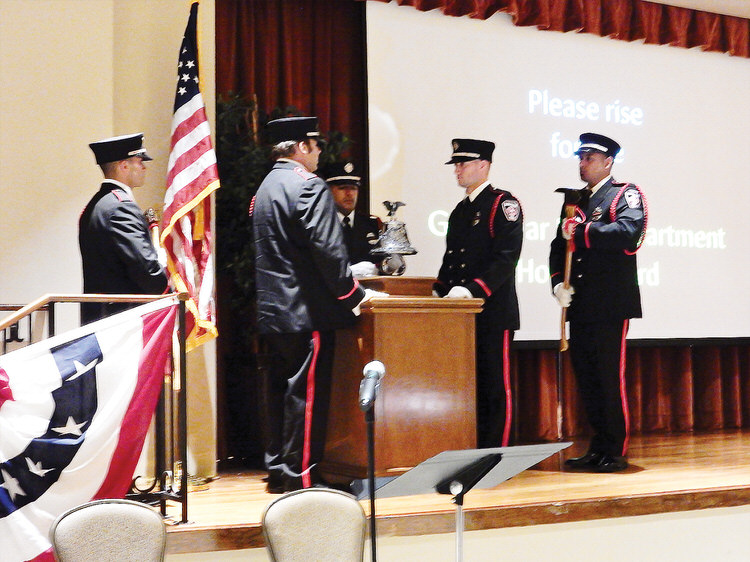 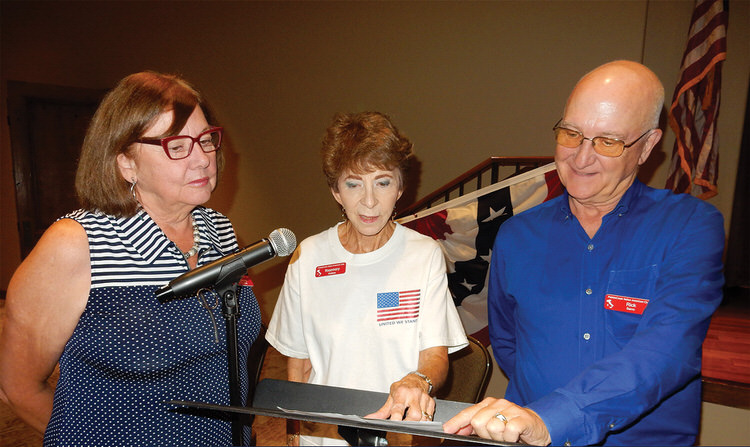 From left: Melissa D’Onofrio, Rosemary Holmes, and Ric Sarro review the presentation sequence during the PebbleCreek Italian American Club tribute to 9/11. The three were speakers.

More than 140 club members and invited guests commemorated the events of that tragic day. The tribute remembered those who perished 20 years ago during the terrorist attacks in New York, Pennsylvania, and Washington D.C., as well as those who have since died from injuries incurred during the recovery efforts.

PCIAC thanked current health care workers and emergency responders who are waging the continuing battle against COVID-19 and saluted veterans and active-duty military for protecting our freedoms.

The club’s Communications Committee put the presentation together, which included musical and video segments. The committee members are Melissa D’Onofrio, Janice Goodwin, Peggy Lemmo, Ric Sarro, and Marilu Trainor. Sarro, as the emcee of the tribute, often repeated, “We will never forget.”

Italian Club members Rosemary Holmes and D’Onofrio shared first-person accounts of their 9/11 experiences with the audience.

Holmes was traveling in Italy with her husband and others when their tour group learned the initial tragic news. She explained how difficult it was to get updates for many days. Holmes recalled she was emotional when she witnessed Europeans coming to a complete stop for three minutes to recognize the USA and the international impacts of the tragedy because many nations lost citizens aboard the flights and in the Twin Towers.

The nation’s capital area was the theme of D’Onofrio’s message. She chronicled how she was driving from her Virginia home to work in downtown Washington. D.C. She noticed a low-flying airplane as she passed the Pentagon. Soon after arriving at her office, she saw the Pentagon burning and realized that was likely the hijacked airplane she saw. She watched the White House, next to her office, being evacuated because of the fear it or the Capitol might be the next target. She concluded by mentioning the positives that happened—long blood donor lines, how people slowed down and treated each other better, and how citizens were more patriotic.

Goodyear Fire Department Captain/Paramedic Mario Santos and Scottsdale Fire Department Captain/Paramedic Brett Shupnik videotaped messages sharing their experiences while attending previous 9/11 remembrances in New York City. They explained 9/11 is one of the most significant days for the firefighter community and has forever changed the way they work. They shared highlights of the special ceremonies taking place at fire stations in New York City to commemorate the lost firefighters.

The Goodyear Fire Department Honor Guard presented the colors as the meeting began. During the tribute, the honor guard demonstrated a ceremonial bell ringing. The simulated bell toll 5-5-5 ceremony is used when fire departments honor a fallen firefighter.

In recognition of and thanks for services rendered by local fire departments to all residents, PCIAC Vice President John SantaLucia presented a $500 donation to the United Goodyear Firefighters Charities.

Sarro finished the night by reminding all “to appreciate every day they have and make the most of it.”

Members and guests sang “I’m Proud To Be An American” as they waved American flags at the conclusion of the tribute.