On April 25, golfing with her husband, Bob Burghdorf, and good friends, Michelle and Denis Cattin, a beautiful Arizona day was about to become very memorable for Sandra Nielson.

Sandra teed off on the 17th hole, Par 3 of Tuscany Falls East, the yardage was 145 yards, and she hit her six iron onto the green. She and Michelle could see it going straight at the flag but lost sight of it. When they got up to the green, they thought it had rolled off the back, until an observant neighbor yelled that it was in the hole! The shrieks of joy could be heard for miles around!

Sandra, an accomplished athlete, started playing tennis at the age of eight, played in many tournaments, and competed in college. While still playing tennis, she also enjoys playing pickleball at an advanced level.

Sandra lived most of her life in the Santa Cruz area of northern California. She has enjoyed her 30-year career as a real estate investor and remains active in that venture.

Sandra began golfing regularly when she and Bob moved to PebbleCreek in 2011. Aside from being a multi-talented athlete, you can see and hear Sandra singing alto with the PebbleCreek Singers, and she has appeared in many Showtime Productions.

Congratulations to Sandra Nielson on her first hole-in-one! 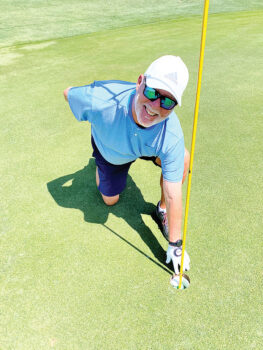 On Friday, April 23, Phil Smyth made an ace on the 16th hole of the Tuscany Falls West course. This glorious shot was made during the third round of the PCMGA Matchplay Tourney, which used a Ryder Cup format. Phil now qualifies to share in the annual hole-in-one prize along with recent ace makers, Ken Ogden and Paul Polk.

The 16th hole played 123 yards from the white tees. The pin placement was left middle. In a helping wind, Phil hit a high trajectory baby draw with his wedge. The ball landed on the green and took one hop right into the hole. Phil and his three playing partners, Jim Scoular, Ian Downing, and Ed Boehm, saw the ball go in. Someone yelled, “It went in!” Fist bumps and some high-fives ensued. High-fives had been unheard of during this era of COVID-19. However, this time, all four players were fully vaccinated. Apparently, this is one benefit of getting the shots!

Phil grew up in San Jose, Calif. He was drafted by the U.S. Army out of high school and was stationed in Wiesbaden, Germany in the Military Police Customs Division. After two years of service, he returned to California and attended San Jose State utilizing his GI Bill benefits. He graduated with a degree in business administration.

At a job fair at San Jose State, he secured a job with the Bechtel Corporation, an industrial contractor who was building the Palo Verde Nuclear Plant west of Phoenix. The job involved supply chain management (warehousing/purchasing/shipping). So, he packed up and moved to the Phoenix metro area. Back then, there was nothing west of 57th Ave, so he ended up in the Tempe/Mesa area to be near people his own age. He had a two-and-a-half hour round trip commute each day.

He worked for Bechtel for eight years at Palo Verde. He then took a job with Arizona Public Service (APS), who managed the Palo Verde Plant, and continued his supply chain management work. He spent the next 27 years at APS continuing his long commute to Palo Verde. He was a van pool captain and commuted with several other employees four days a week. Usually he drove in the morning and slept on the way home. It has been calculated that in 35 years of commuting to Palo Verde, he spent over four years of his life in that van driving or sleeping! A loyal employee, for sure.

Phil and his wife, JoAnn, moved to PebbleCreek in 2004 and are enjoying life to the fullest.

Congrats to Phil on his great shot and a short commute to the golf course!