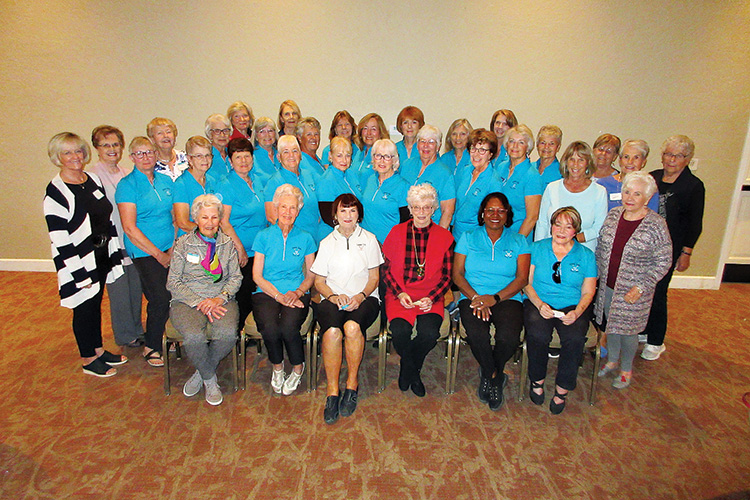 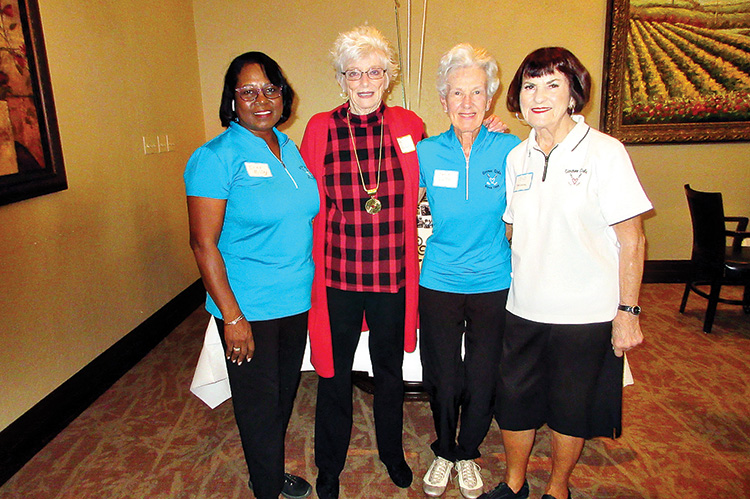 On Friday, March 13, 36 current and former Gimme Girls gathered for lunch at the Eagle’s Nest restaurant to celebrate their 20th anniversary.

The party was hosted by Emma Mosley, Syd Merserau, and Karin Smith. All three of these ladies are charter members of the group.

Sue Woodard started the group in 1999. Sue talked to the group about the history of the Gimme Girls and told stories of their spring trips. Their first trip was to Sedona, attended by about 12 ladies. She recalled that, in addition to golfing, they did a lot of shopping. Their second trip was to Casa Grande. They played golf through some thick fog, almost hitting one another. She recalled when Emma joined the group, they all said, “We finally have a good golfer.” Through the years, each golfer has purchased Gimme Girls logoed shirts. She recalled their first shirt was sleeveless.  One year they also had a man’s shirt. In addition, they had ball markers that read, “It’s a Gimme.”

Pictures from the past and several shirts worn by the group were displayed on a table. A cake congratulating the group was also displayed and eaten after lunch.

All who attended announced their name and what year they joined the Gimme Girls. As a special treat, Jane Wiederhold wrote a poem and read it out loud about the camaraderie of this special group of ladies.

The group currently has 26 members. They play 18 holes every Friday. Scorecards are distributed with a game to have some friendly competition. They meet afterwards to award the winners. Once a month the group gathers to have lunch. The group has a leader. This year it is Diane Galewski. The members have formed a close bond with one another. They acknowledge birthdays, weddings, and anniversaries and continue the tradition of a spring golf outing.

There was a moment of silence for those former members that have passed: Alice Abonyi, Lois Dejarnette, Sandy Frazee, Barbara Green, Marilyn Larsen, Natalie Niemi, and Connie Steckler.

After a toast was made, the cake was cut and served.

Special thanks to Emma Mosley for coordinating this event with Karin Smith and Syd Merserau. In addition, thanks to Clint Hull for being our photographer.