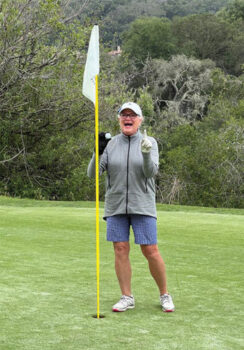 Carol Sanders shares her emotions following her first hole-in-one in California on April 28, 2022.

After golfing more than 50 years, Carol Sanders, a PCLGA member, finally achieved a hole-in-one. Carol was golfing in Ramona, Calif., at the Mt. Woodson Golf Course, when she made the ace on April 28, 2022.

Carol says she really did start golfing when she was 14 and golfed a lot as a teenager, but put most of her golf on hold during her law career at a big Chicago law firm.

The third hole at Mt. Woodson was playing 89 yards from Carol’s tee box. Using her trusty Ping 9 wood, she hit her Bridgestone ball to the far left side of the green from where it rolled to the right, eventually falling into the cup.

She was playing golf with her boyfriend and fellow PebbleCreek resident, Paul Polk. Neither Carol nor Paul actually saw the ball fall into the cup, but their playing partners were close to the green when the ball landed and promptly started yelling, “Hole-in-one!”

When Carol and Paul reached the hole, high fives and hugs were exchanged after Carol lifted her ball from the hole.