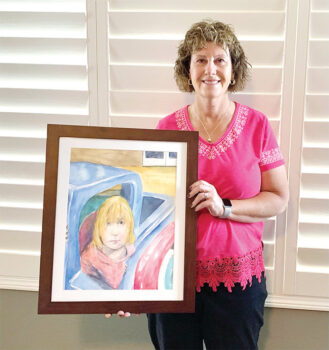 The Art Club is delighted to award Artist of the Month for April to Barbara Johnson-Rossi.

Barbara was born in Wisconsin Rapids, Wis. to a family that loved animals. When she was seven, they moved into the country and bought horses, which started a 30-year stretch of loving, owning, raising, and showing Appaloosa horses. Barb spent countless hours trying to get good photos of horses for advertising and sales. She also became obsessed with drawing horses, studying their angles, lighting, and shadows and won many blue ribbons for her drawings in county fairs. In high school, Barb took every art class she could take and started painting with oil paints.

Unfortunately, being a professional artist is difficult as a career, so Barb decided to go into accounting as her major in college. During college, Barb earned money drawing portraits and taking horse photos during the summers. After graduation, Barb worked for two years in public accounting, and then took a job at Marshfield Clinic in Marshfield, Wis. Over the course of a 23-year career in healthcare finance at Marshfield, she worked at a variety of positions, the last being CFO for Security Health Plan, the HMO owned by Marshfield Clinic. Until 2007, Barb continued to own and show her horses, and she continued to enjoy photography, but drawing and painting seemed a distant memory.

In 2009, after her 15-year marriage ended in divorce, Barb took a job at Essentia Health out of Duluth, Minn. She became the CFO for the East Region and VP of Financial Operations for the system. After four years of high stress work, she married David Rossi and started to think about retiring early. David was already wintering in a Paradise Valley, Ariz. condo. In 2013, Barb reduced her job to 20 percent and worked remotely, spending summers in the Michigan Upper Peninsula and winters in Arizona.

After one winter, David and Barb decided that they needed to look for a house, and PebbleCreek became their new winter home in 2014. One thing that caught Barb’s eye was the wonderful Creative Arts Center in PebbleCreek, which meant getting back to art became a real possibility. Barb joined the PebbleCreek Art Club and started taking classes in watercolor painting. This was a medium that she had always liked but never was able to learn. She also got involved with the Art Club, serving as treasurer for four years. She was involved with the Spring Art Show for several years. She has completed several paintings, although it remains a challenge to paint as much as needed to excel at the medium. She just tries to remember, it’s the start that stops most people!

You are invited to view Barbara’s artwork, now on display in the Creative Arts Center and at the Tuscany Falls and Eagle’s Nest Clubhouses.