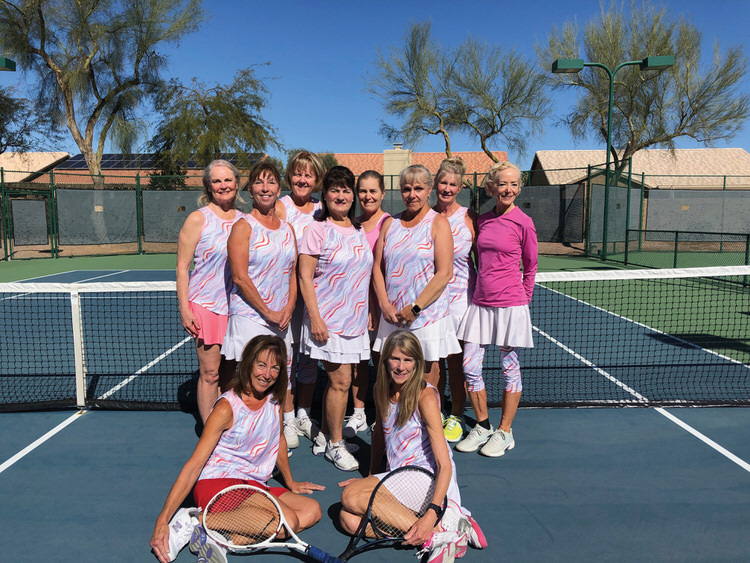 With all the new growth in PebbleCreek (PC), several women in the tennis club felt there was a need for another 4.0 women’s team to provide competitive opportunities for new, talented players who are moving here. We are happy to report that this new team had a great first year in the West Valley 50+ tennis league. This team was captained by Lorinne Banister, who has been playing on PC teams for four years, and new resident Brenda Cook, who recently moved into the community with a 4.0 ranking.

Lorinne met Brenda on the tennis courts and discussed with her the limited space for new top players like herself. She asked Brenda if she would like to help her start a new 4.0 team, and she eagerly agreed. The existing 4.0 team had almost 20 ladies on its roster, which limited the amount each person could play since only six play at each match. It was reasonable to think that there would be more talented ladies like Brenda moving to PebbleCreek seeking competitive tennis opportunities. The objective for this new team was to provide options for competitive players who move into the community, while also expanding choices for existing players who desire more playing time.

The tennis club approved the formation of this new team, and an invitation was sent to all female members in the club. Within the first few days, the team had 10 committed ladies. Once the roster was set, this group of ladies met to discuss their team goals, practice schedule, and the very important team name. After much discussion, the name Alley Girls was chosen.

There was a bit of trepidation by the captains to see if this group of ladies could successfully compete at the competitive 4.0 level, but all those nerves were calmed when the team won all three courts at their first match. During the first season, this team added three new residents who are now active members of this team. Welcoming these ladies to this team supports the original mission for creating this team, “to provide opportunities for our new neighbors to be part of competitive tennis here at PC.”

The members of the Alley Girls team want everyone to know that tennis is a sport for a lifetime, and they will continue to work with the tennis club to create opportunities for anyone who wants to play tennis at any level. Tennis has historically been somewhat of an exclusive sport, and the tennis club wants to make sure that the culture here at PebbleCreek is one of inclusiveness, so everyone can participate and find other members to play with at their level or join as a social member and participate in the monthly social events (free food/beverages). In addition to the monthly socials, there are Skills & Drills (free) and professional coaching clinics or group and individual lessons (small fee). You don’t have to play on a team to participate and enjoy tennis here at PebbleCreek. Whether you are a beginner, returning after 20 years, or an advanced competitor, you are a welcomed and valued member of the PebbleCreek Tennis Club.