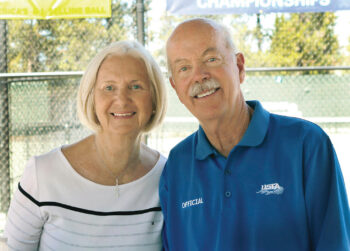 Oftentimes, the Tennis Player of the Month article highlights what that player has done off the court. In the case of John Flynn, his accomplishments on the court almost overshadow his achievements off the court.

John is a native of Portland, Ore., where he grew up, attended college, taught high school english and history for 32 years, met his wife Carmel, and raised their family. Through all of these lifetime milestones, tennis has been a part of John’s journey.

John started playing tennis at the age of thirteen with instruction from his older brother Jim, who was twice Oregon’s amateur champion. John played varsity tennis through high school and during his freshman year in college. He started playing United States Tennis Association (USTA) tournaments at age 19, and continued for 30 years. John then played on various men’s tennis teams during this time.

While volunteering to be an umpire at his tennis club’s tournament, John had the opportunity to call lines for tennis greats Roscoe Tanner, Boris Becker, Stefan Edberg, and other professional tennis players. John loved the experience and has been a USTA umpire since 1981. His high rating as an umpire gave him the opportunity to officiate at the U.S. Open during the time of Jimmy Connors, Chris Evert, Bjorn Borg, John McEnroe, and Tracey Austin. John continues to referee in the northwest during the summers.

John met his wife Carmel at a church social in Portland, and they have been married for 50 years—congratulations! They have two sons, KC and Sean, and four grandchildren. Of course, KC and Sean both played Division I tennis in college. When Sean moved to Phoenix, John and Carmel decided to sell their summer condo in Palm Desert and look for a place close to their son and grandchild. Neighbors in Oregon, Champ and Kathy Husted, had a place in PebbleCreek and suggested he and Carmel look there, which they did, and they bought a home. They cite the “friendly folks, great amenities, and multiple activities” as what drew them to PebbleCreek.

In addition to playing tennis, John is active both on and off the court. John was a member of the Tennis Club board for four years, served as president, and started our skills and drills lessons to encourage new players to play more tennis.

John has played with a group of 3.5 players at PebbleCreek that Neil Collender organized. This group later became The Amigos when Charlie Reinert took over for Neil, and continues still. John plays three days a week with The Amigos and is a member of the PebbleCreek Men’s 3.5 Team in the West Valley League.

John also provided the musical entertainment at the PC Tennis Club’s popular Cinco de Mayo Party, along with fellow musicians the past few years. Off the court, John has performed in Showtime productions, sang and played guitar with a couple of folk groups, and he and Carmel helped start the Irish American Club.