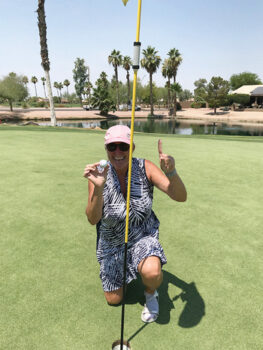 Carole Schumacher in the moment following the ace.

During PCLGA play at Eagle’s Nest on June 15, Carole Schumacher entertained her foursome by getting her first hole-in-one. The game for league play that day was Minnesota Mini, where your team must count at least two scores on every hole but can count three or four scores if there are additional birdies or better scores to arrive at your total best under par score.

The team, consisting of Schumacher, Nancy Moore, Anne Gaus, and Sharon Johnson, started shotgun play on the most difficult hole on the course (number 6), and after playing 13 holes they were in last place, despite Carole’s birdie on number 11. As the team made the turn at hole number one, with only five holes left to play, Carole said, “Okay ladies, we’re in DFL, let’s get with it and score some points.” She then proceeded to double bogey hole number 1.

Upon arrival at hole number 4, Schumacher ritualistically measured the distance to the flag at 105 yards, selected her pitching wedge, and hit her ball while her teammates awaited their turn. As the ball approached the green, it looked pretty good coming in from the left side, rolled onto the green, and seemed to disappear quickly by the yellow flag.

“I think it went in the hole,” said Carole, knowing that her three partners still needed to tee off. Moore scoped the green with her laser and said she didn’t see the ball anywhere either. Upon arrival at the green, there were three balls on the surface, and Carole’s was in the hole!

Carole attributes her lucky ace to lessons she had been receiving from her husband, Ken Schumacher, who had been serving as Carole’s caddie, since the first of May when he broke his left clavicle, and accompanied her on all her golf outings (except for regular Tuesday play when caddies are not allowed by PCLGA rules). The other lucky charm was having Nancy Moore on her team since Nancy had been in PCLGA president Chanca Morrell’s foursome when she got her hole-in-one earlier in 2021. “Everyone will want me on their team now,” said Moore during their after round celebration at Eagle’s Nest.

Carole and Ken moved to PebbleCreek in January 2016 from Highlands Ranch, Colo., where Carole was a commercial real estate broker and golfed occasionally. She began honing her game as a member of the PebbleCreek Ladies Niners for several years before joining the 18-hole league in 2019. She took on the role of publicity chair for PCLGA on June 1 and chuckled as she told her teammates that this article will be her first article for the PebbleCreek Post in that role.

Carole loves to make a splash and is known for her laugh (as well as her wiggle when teeing off). To complete her celebration on the 115-degree day, Ken filmed her Dinah Shore moment as she jumped into their swimming pool in full golf attire to cap off her hole-in-one accomplishment.