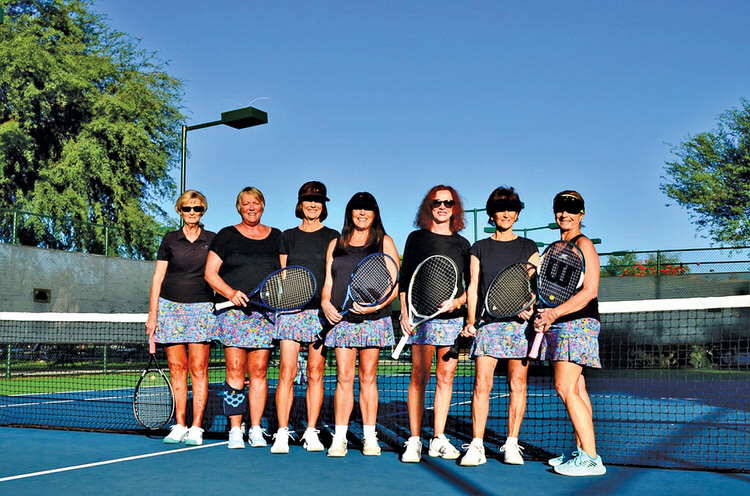 Beep beep! The RoadRunners 3.5 tennis team is on the run in the Women’s InterClub Tennis League (WITL)—Valley of the Sun Tennis League. This group is known for their quickness on the courts!

Although the season has just started, the Division B-4 RoadRunners are off to a great start. Currently, the team competes every Tuesday morning all over the Valley, either here in PebbleCreek or somewhere between Anthem and Gilbert! There are six team members who travel to these different locations. Currently, there are 12 to 14 teams in this division.

How do they form this incredible, competitive team? The team looks for new players by recruiting women they have observed during matches here in PebbleCreek. The teams in their division change frequently; this year alone there were five new teams. The team must always have a keen sense of playability to identify the continual changes in league teams. This makes it even more fun to play, as they are getting to know the dynamics of the new players, which lends to quick assessments and thinking while on the courts. When forming the team, they look at playing ability; however, they look for members who are there to play like a team. They play hard, and they have fun. Without both of these attributes, there is no team—there is just a group of ladies playing tennis.

The team expects all members to practice together. The practice is very important in learning the skills and partner placements of each player. As they play mostly women who are younger than them, it is crucial to have commitment, a sense of humor, positivity, and the willingness to travel to the matches. The team members are dedicated to practicing once a week. This is what allows a RoadRunner the ability to “hold their own.”

The B-4 division does not have tournaments. They are solely individual team competition matches. At the end of the season, the RoadRunners are usually ranked right in the middle of the division.

The group doesn’t recall any notable players from the past, as they have been a cohesive team with a good dose of humility. “One for all and all for one,” as their team captain explains. They play six team members every week.

If you were to meet any of these players, the first things you would notice are their warm smiles and welcoming demeanors. Visiting teams know that they are welcomed in our community and that they are treated with the utmost respect and dignity.

Jo Werner is the current captain of the team, with Shelley Bain as the co-captain. They are both looking forward to a year of healthy competition and growing friendships.