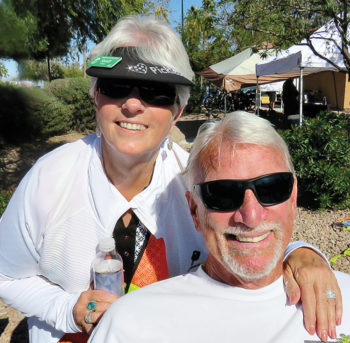 Because of her passion and dedication to pickleball, Sherrill Mercer has been selected as this month’s PebbleCreek Pickleball (PCPB) Club Volunteer/Player of the Month. Sherrill has been an advocate for the beginner pickleball players in PebbleCreek. She is on the front line, introducing new players to the sport and to the club, taking them under her wing and making them feel welcomed.

Sherrill retired in 2013 from a 25-year career as a marriage and family therapist. She taught drug and alcohol classes in the jail system, DUI classes for the legal system, ran groups for victims of sexual assault, and volunteered at a women’s shelter as a first responder on the Sexual Assault Crisis Team.

After living in California all her life, when Sherrill retired, she moved to the state of Washington and stayed there until her move to PebbleCreek in 2015 with her husband, Norm. Sherrill and her husband both wanted to get away from the gloomy rain and live in an area that was warm and sunny.

Like many of us who were once new to PebbleCreek, Sherrill became interested in learning pickleball. Her initial experience led her to get involved in the PCPB Club. She developed the Novice Tour that takes place immediately after the Novice Instruction class. The goal of the Novice Tour, now titled the Novice Informational Tour, is to make new players feel welcomed and informed. Sherrill reaches out to new players to encourage them to play and get involved in the club. Sherrill has volunteered at PCPB Club events, served on the Court Allocation Committee (CAC), and was on a previous PC Pickleball board serving as member-at-large.

“I used to ride endurance horses and raised cats as my hobbies before retirement. Now, I love cruising, reading, reading on cruises, going to the movies once a week, having lunch with friends, and playing cards.” In addition to pickleball, Sherrill spends time with her five children, five grandchildren, and one great grandchild.

We are so very lucky and appreciative to have people like Sherrill, who have taken the time and effort to make the PebbleCreek Pickleball Club what it is today.