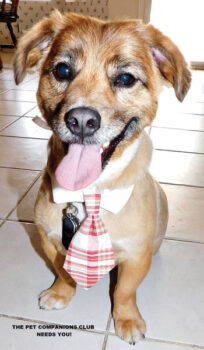 During our Jan. 12, 2022, general membership meeting, we will be holding our annual election of officers and directors. According to our bylaws, the board of directors of The Pet Companions Club of PebbleCreek consists of a minimum of four and a maximum of eight members.

According to our bylaws, any club member interested in running for office (as officer and/or director) should submit his or her name no later than the November general meeting. Nominations will also be accepted from the floor at the November meeting, which will be held on Wednesday, Nov. 3, from 3 to 5 p.m. in the Eagle’s Nest Activities Center in room 100.

We encourage club members interested in animal welfare and rescue issues and those interested in influencing the direction of The Pet Companions Club to step forward and become candidates for these positions. We need active involvement from our members in order to remain a viable organization. If you are a resident who is not currently a club member and are interested in becoming a board member, please submit your membership application prior to our November Meeting. The membership enrollment form can be found on the homepage of our website at pcpets.org.

Members willing to submit their names as candidates can do so by email, phone, snail mail, or in person at the November meeting.