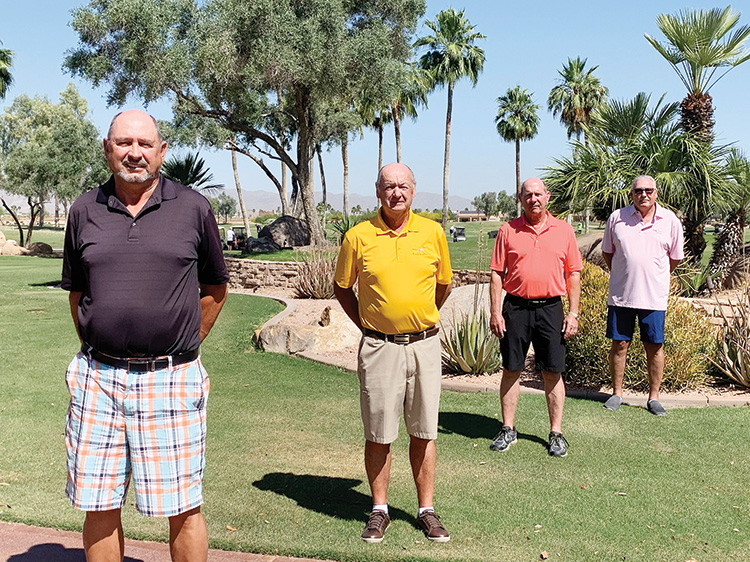 At the Member-Member Tournament earlier this year, the PebbleCreek Men’s Golf Association (PCMGA) elected officers for the 2020-21 golfing season. They officially take office on June 1.

Jim Sheard (president): Jim is originally from eastern Indiana. He was the principal officer of the Teamsters Union in the state of Nebraska and western Iowa and held other positions in the three-state area of Missouri, Kansas, and Nebraska. He served in the Air National Guard for 28 years. Other than golf, he handicaps and wagers on horse racing, but he calls it “investing” and not gambling. He and his wife of 47 years, Kathy, have lived in PebbleCreek since 2014. Jim previously served the PCMGA as vice president. Serving as president, Jim’s main responsibility is to preside at meetings and oversee the daily operation of the PCMGA.

Ken Schumacher (vice president): Ken grew up on a farm in south central North Dakota. He spent his career in the hospital equipment industry, first as a biomedical technician and then in sales. He managed a medical sales operation in Fargo for 18 years, then moved to Colorado to open and manage a similar operation for 21 years there. Ken enjoys woodworking and is quite an accomplished artisan making such items as end-grain cutting boards and a marbles game board. He was heavily involved in the Lions Club in N.D. and Colorado and held several positions, including president. He and his wife Carole enjoy traveling and moved to PebbleCreek in 2016. Ken previously served the PCMGA as secretary. Serving as vice president, Ken’s main job is to chair the Member-Guest Tournament.

John Abercrombie (secretary): John was born and raised in small towns in Kansas (Barnard and Minneapolis) and spent most of his adult life in Oregon. He learned to play golf on sand greens. He spent his career in banking, finance, and IT consulting. He enjoys hiking, biking, traveling, reading, and exercising. John and his wife Sue have lived in PebbleCreek since 2013. John served as the PCMGA’s social chair for the last four years. It’s one of the most difficult positions on the board. He was responsible for arranging all food and beverage needs of the PCMGA. Serving as secretary, John’s main function is to keep the minutes of the PCMGA’s meetings and communicate the results of those meetings via the group email and on the PCMGA website.

Rand Hill (treasurer): Rand is from Hood River, OR. He graduated from Oregon State University with a degree in finance and accounting. He currently serves as the CFO for three investment companies as well as for Dillanos Coffee Roasters. Dillanos annually roasts 3 million pounds of coffee sold nationwide. In 2017, he was nominated for the Seattle South Sound Financial Executive of the Year. He and his wife Susan moved to PebbleCreek in 2016 and enjoy pool time together. As treasurer, Rand’s key responsibilities include the keeping of membership records, issuing checks and preparing monthly financial status reports.

The PCMGA would like to thank our outgoing officers/board members John Low, Mike McMahon, and Gus Gustafson for their many years of service.