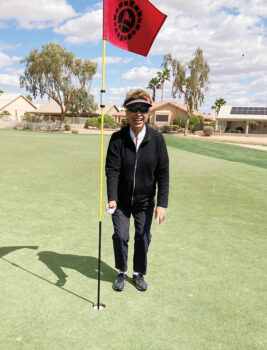 On March 16, in the presence of her friends Tricia Self, Elaine Carlson, and Valerie Bobigian, Esther Frehner hit a perfect shot at the Par 3 hole number 17 at Eagle’s Nest! This was Esther’s fourth ace, but she said it felt like her first because it was so exciting to watch the ball roll right toward the pin, take one hop, and disappear! She and her companions were screaming and hollering for the ball to go in the hole, and in it went! How exciting!

Esther and her husband moved to PebbleCreek in 2002. On April 1, 2021, Esther hung up her wings from her job as a flight attendant at American Airlines, after 37 years. She really enjoys golfing, more now than ever after having another hole-in-one, and she looks to the future of teeing it high and letting it fly.

Congratulations to Esther for all of her achievements!