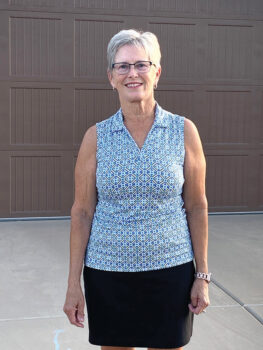 Back in 1994, a small group of women laid the groundwork for what would become the PebbleCreek Ladies Nine-Hole Golf Association (PCL9GA). Fast-forward to October 2020, when PCL9GA officially welcomed Val Braden as the league’s 300th member!

Since June 1, PCL9GA has added 20 new or returning members, with more potential golfers in the pipeline. Interest in golf has peaked amidst the pandemic, but it hasn’t always been so easy to attract new members. Early league organizers found themselves recruiting women who had never golfed just to convince Robson officials there were sufficient numbers to warrant a formal nine-hole league.

Current PCL9GA members Wendy Wisser and Jinny Pearson were among the first organizers. Wendy had never played golf when she moved to PebbleCreek, and Jinny was already a member of the women’s 18-hole league. They, along with other friends and allies, campaigned for a nine-hole league that eventually became part of the Arizona Women’s Golf Association (AWGA) in the late 1990s.

While major milestones in the evolution of the league have been achieved along the way, the PCL9GA membership has only recently seen such rapid escalation. It was only two years ago that the 200 member mark was reached.

Our 300th member, Val Braden, is excited to get started. When asked her reasons for joining PCL9GA, she explained she is just getting back into golf and wants to ease in gradually. She was looking for a fun, casual golf experience, playing with women of all skill levels. Current member, Kate Schaffer, was an affirming influence in Val’s decision to join.

It takes the contributions of many to make PCL9GA a success, and we can all be proud of this milestone!