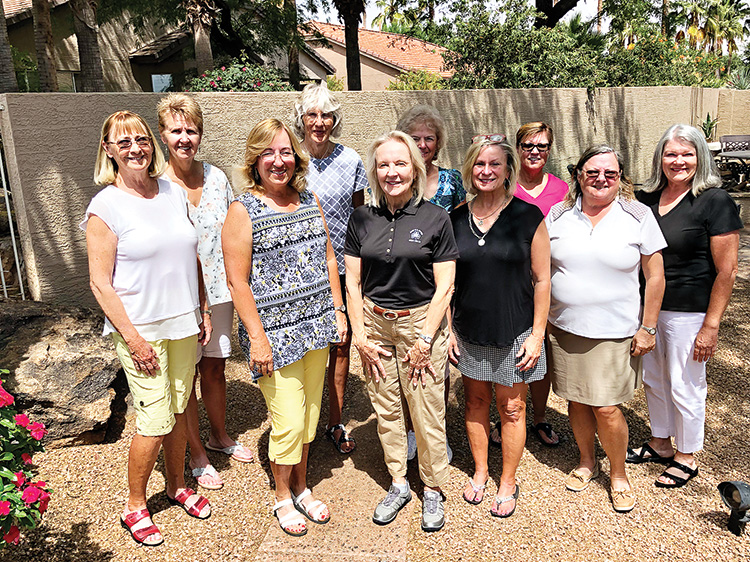 On May 15, 2019, the PebbleCreek Ladies Golf Association’s board members and several committee chairs, out-going and incoming, met for a “cross-over” brunch hosted by President Marilyn Reynolds. The brunch was a delightful way to end the 2018-2019 season and provide an opportunity for the new board and committee chairs to have one-on-one discussions with previous members to start the transition of responsibilities.

Other board members who will be transitioning are Barbara Patrow, parliamentarian, replacing Judy Hauser; Claudia Tiger, handicap chair, replacing Barbara Chilton and Vicki Ray and Layne Sheridan, tournament directors, replacing Vicki Norrie and Judy Layton. Two board members who agreed to team up as Tuesday Play Co-chairs this past year, Carol Sanders and Linda Thompson, have agreed to continue in their roles for another year. They have worked very hard this past season to develop a cadre of members who have learned the Golf Genius program and who will be a valuable resource for the PCLGA for years to come—thank you, Carol and Linda!

Those who are continuing in their committee roles are Ellen Enright, photographer; Sharon Johnson, technology advisor, plus birdies and achievements; Chanca Morrell, assistant technology advisor and Linda Glazar, graphics. Check out the PCLGA website for more details along with the 2019-2020 tournament chairs and schedule and the listing of representatives to various organizations, including captains/co-captains of PCLGA Roadrunner and Cholla teams.

A huge thank you to all who have served in so many capacities to make this past year fantastic! Good luck to the new board as you begin to plan for another exciting year of PCLGA golf!