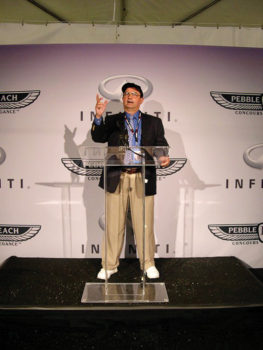 Originally, this month’s article was going to be about Pat Chaback and her Mercedes. Well, she and her husband are on their way to San Francisco and won’t be back for a while. It’s hard to imagine forsaking the special ambiance of Goodyear (AKA Goodyear, Gateway to Avondale) for San Francisco, but maybe she’ll be back in time for next month’s PebbleCreek Post.

This month, instead, I want to focus on the rewards of volunteering. Everyone should know a person like Sam Smith. He and I go all the way back to our junior college days in Maryland. I can say, hands down, Sam is the best person that I’ve ever known.

It was the late sixties. Bob Dylan described the times so well in his song, “Tangled Up In Blue” when he wrote, “there was music in the cafes at night and revolution in the air.” I got drafted, and because of health issues, Sam didn’t. This interrupted a great “car buddy” friendship. We lost contact with each other for 30 years.

Then, I was walking around the Pebble Beach Concours d’ Elegance and, poof! There was Sam sitting amongst the Ferraris wearing a volunteer’s blue blazer. We took up a conversation like we hadn’t seen each other in a week. Sam had become a major player in the Ferrari Club of America. He was their senior concours judge, he managed racing teams, brokered about 20% of the Marriott collection, had written magazine articles, was used as a source for books written about Ferraris, “etc., etc., etc.” to quote Yul Brynner. In issue number 208 of the Ferrari Club of America magazine The Prancing Horse they did an homage to Sam’s photography. Sam being Sam, did the right thing. They used picture of his ’61 Alfa Sprint Speciale that I took. Sam insisted on me getting a photo credit, even though they misspelled my last name.

In the real world, attaining a volunteer’s position at the Pebble Beach Concours takes about six to seven years of going to the right parties, laughing at stale jokes, running drinks, and severe kissing “elbows” of the right people. That is, unless you know Sam. In a couple of weeks, I had volunteer positions at the Pebble Beach Concours d’Elegance, the Tour d’Elegance, and the Motorsports Gathering At The Quail. With those credentials, I can get a volunteer position anywhere in the universe.

Anyway, volunteering is great fun. It allows one to hob knob with movie stars, members of the auto elite, and take pictures before the hordes of people who are elbowing for position to take the same shot, to name a few benefits. Last month’s picture of the Mercedes 190 SL was taken at the now forever ended Arizona Concours d’Elegance at the Biltmore while I was a volunteer. I secured that position immediately because of my volunteering credentials. Volunteer—it’s a great experience.

Lastly, awhile back, I left my Pebble Beach Rolex hat at the coffee shop here. If you found it, please return it. Also, if you drive a Mercedes and have a story to tell, contact me at [email protected]