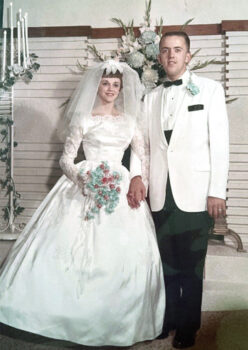 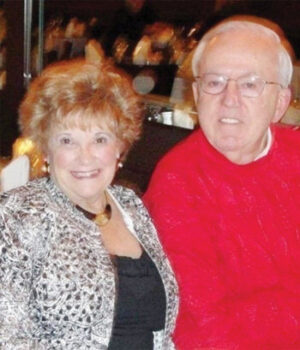 Marilyn was born at Dee Hospital and grew up in Ogden, Utah. Barry moved to Ogden with his family in 1958. The two met at Ogden High School. Barry graduated in 1960 and Marilyn graduated in 1961. They married in Ogden on May 25, 1962.

Their married life began with Barry attending Weber State days and working at Thiokol Chemical nights, and Marilyn working days at Bell Telephone Company. In 1963, Barry accepted a special assignment from Thiokol to work on the space booster test build in Georgia. They lived and worked in Georgia and Florida for two years and saw the booster’s successful test.

They returned to Ogden in 1965. Barry completed his education at Weber State and Marilyn returned to Bell Telephone Company. In March 1966, their first son, Brian, was born at Dee Hospital.

After graduating, they moved to Illinois and Barry began his 50-plus year career in healthcare with Abbott Labs. In February 1969, their second son, Curtis, was born at Waukegan Hospital.

The family relocated eight times over the years for business assignments—Illinois, Los Angeles, Dallas, Boston, San Francisco, Michigan, and Kansas, where Marilyn started her design business, That Special Touch Interiors. She had a successful business for 20-plus years. They now live at PebbleCreek Resort Community of Eagle’s Nest in Goodyear, Ariz., where they daily use many of the amenities, clubs, etc. Marilyn continues her artistic endeavors in multiple media and has sold paintings at the art exhibitions held by the Art Club.

Brian and his wife Susan live in Waco, Texas, where they raised three children (Brianna, Braeden, and Brinley)—all home schooled who have achieved advanced degrees in healthcare and business. Brianna and her husband have given Marilyn and Barry two great-grandchildren (Margaret, 2 years old, and Juliana, 1 month old). Braeden and Brinley are both getting married in 2022—Barry and Marilyn plan to be in Waco for the weddings and family celebrations in July and October.

Curtis and his two children (Cohen and Jorden) live in Castle Rock, Colo. The two grandchildren are in their early teens and enjoying all that Colorado offers.

Marilyn and Barry celebrate not only the joys of their 60 years together. but also the sorrows and everything in-between. They are grateful for the many friends they have made along the way and remain connected to them through frequent cards, emails, and travels. They look forward to celebrating many more anniversaries and other joyful gatherings with family and friends in the future.