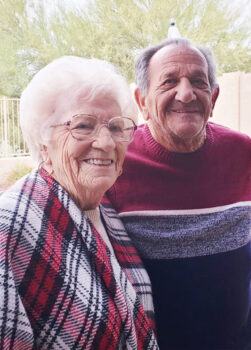 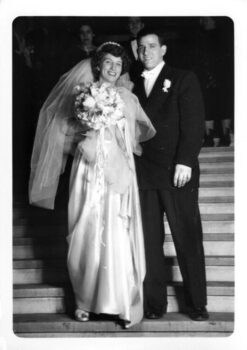 Jan. 6, 1951, a cold, sunny, and snowy day in Chicago, Tony Scalzitti and Mary Defino were married at St. Columbkille Catholic Church. Surrounded by a large Italian family and many friends, Tony and Mary made their wedding vows to love and honor each other for the rest of their lives. Here is a look back on their 70 years together.

Just months after they were married, Tony left to serve in the United States Army during the Korean War. Mary remained in Chicago, living in the basement of her father-in-law’s home. When Tony returned, he began a 40-year career as a lithographer. In the 1950s, they had three children, Glenn, Gail, and Marilynn. While Tony worked his 40 plus hour per week job, Mary raised the children while taking in various family members along the way over the course of many years. Theirs was a happy home, full of Italian traditions, time spent at Albion Beach on Lake Michigan, Dad playing 16” softball, Mary’s involvement at St. Ignatius Parish, family and friends, and spectacular food. In the early 1960s, along with Mary’s sister Carmela and her husband John, they even managed to open a family pizzeria named Delfino’s where they prepared and served Italian favorites.

Later, they sold the business to her sister, and in 1973 they moved the family out of Roger’s Park in Chicago to the suburb of Villa Park. There they remained until 1993 when they, along with Mary’s sister Carm and her husband John, moved to PebbleCreek’s Eagles Nest where they were the 11th and 12th homes that closed. At the time, it was a sparse development, as Mary once stated, “in the middle of nowhere.” Clearly, “nowhere” did not last long. PebbleCreek and Goodyear have grown in ways that they never imagined 28 years ago. Since they first arrived here, many family members have followed them to beautiful Arizona.

While Tony’s and Mary’s very full lives together have been filled with love and happiness, like so many others, they too have experienced more than their share of loss and sadness, most tragically when they lost their beloved son Glenn in 2018. Glenn was loved by all who knew him, and he is greatly missed. Tony’s and Mary’s faith reassures them that they will be with Glenn again. Surrounded by their children Gail (Mark) and Marilynn (Mike), grandchildren Angela, Linda, Steve, and Billy (Savannah), as well as great grandchildren Alyssa, Micaela, Enzo, John, and Lilly, Tony and Mary experience the kind of love and support that they have provided so many others over the years.

On Jan. 6, 2021, we celebrate the marriage of Tony and Mary as their life’s journey together continues here in PebbleCreek. Along with family and good friends such as Betty and Banks, Martha and Ronny, just to name a few … we say, “Congratulations Tony and Mary on 70 years of love, life, and peace.”