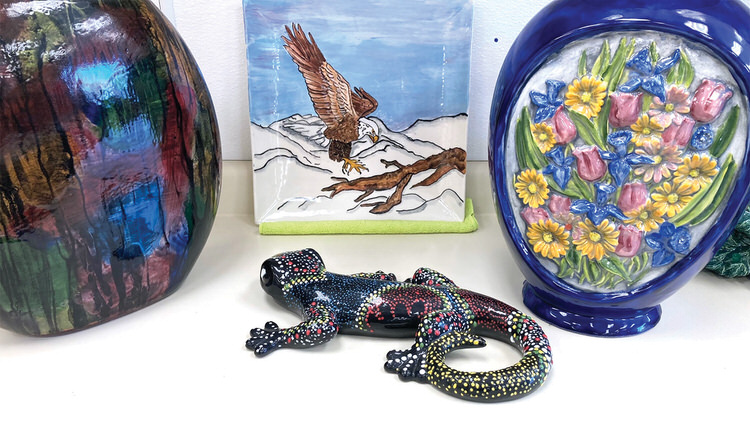 Some of George Wagner’s ceramic pieces, including his favorite, a black lizard with colorful dots

George Wagner can often be found in the ceramics room. He always wears a smile and likes to laugh with everyone. George and his wife moved to PebbleCreek six years ago from Colorado. He says he just got tired of shoveling snow. They had been looking at several communities in the area. When George toured the Creative Arts Center, he walked into Kelli Fredrickson’s class and immediately decided, “This is the place for us.” Everyone was having such fun and making cool stuff. One of the first things he did when he moved was join the Ceramics Club.

George loves color. His pieces tend to be vibrant and eye-catching. He made a turtle that was orange, red, blue, and purple. Who says a turtle must be green? His favorite piece is a black lizard with tons of colorful dots. George makes things for everyone. He says, “When people see me coming, they almost hide from me.” They know he’s probably going to give them a ceramic piece, which is often a spoon rest. George loves to make spoon rests because they are small, and he can try out new techniques in a short time.

George is grateful at how Kelli can help him realize his ideas and contribute to his projects. George made a vase as his first project. It is still on display in his hallway. Kelli got him making things he never thought he could do. He says, “She just brings it out of you.” George doesn’t consider himself an artist and is truly amazed at how he has made projects he never thought he could do, such as a realistic eagle landing on a branch. He says Kelli is the queen of eyes. She paints such realistic looking eyes.

George finds everybody in the club so friendly and helpful. He loves going to classes and learning new techniques. He tries just about every technique he sees, including shaving cream, alcohol, and yarn. He has built on his skills, learning more and more over the years. He has also trained as a firer and likes seeing the whole process from start to finish. He likes sharing the joy other members get when he empties the kiln and people get so excited to see the finished project they made.