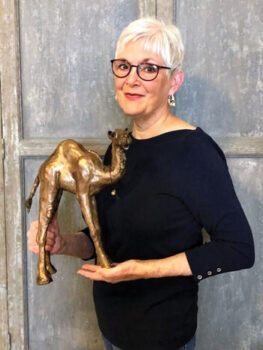 The PebbleCreek Art Club is delighted to announce the selection of Thula Edwards as Artist of the Month for January 2022. Thula’s autobiography follows:

Born and raised in Oregon, my childhood was somewhat unusual, in that my father was a psychiatrist and worked for the state mental hospital. We lived in the doctors’ quarters on the hospital grounds in a lovely home right between the hospital and the state penitentiary. It was a wonderful place to grow up, truly! We had neighborhood friends and the idyllic 1950-60 childhood. As a teen, I was fortunate to have summer jobs picking berries and later working in the local canneries. My sister and I saved enough money to travel all over Europe for five months when I was 19 years old. We saw amazing art, architecture, and sculpture. We both dreamed of staying in Italy to study art. I was already committed to start nursing school and returned home knowing that I had probably made the wiser choice. I graduated with a bachelor’s degree in nursing from the University of Oregon and married my husband, Jeff, six months later. My career spanned everything from obstetrics to NICU to school nursing and adult internal medicine and back to school nursing. Along the way, I had two wonderful children and now five grandchildren. Number six is on the way!

I was always interested in the arts, but did not start experimenting until I was an adult. I satisfied my creative urges with sewing and cooking and squeezed in a few community education art classes while raising my children. More than 10 years ago, we visited friends in SaddleBrooke, the Robson community near Tucson. We fell in love with the Arizona weather, found a seasonal rental in PebbleCreek, and eventually purchased a house. We were snowbirds for about eight years. This was the beginning of my transition into art.

My first class in PebbleCreek was sculpting a human head with instructor Ross Hart. He guided us into the process with gentle enthusiasm and some very good advice: “Don’t fall in love with your work.” His wisdom came in handy when my first sculpture fell apart. He also taught us to save our money until we truly believe we have a masterpiece, before paying to have it bronzed. I am still saving my money!

I took another workshop from Bernie Abrams and a third at Scottsdale Artists’ School with Vala Ola. A weekend class by Joanie Wolters introduced me to fiber clay. This has been my medium of choice for about five years. During the time we were snowbirds, I was only able to sculpt while in PebbleCreek. The summer of 2017, while still living in Oregon, I entered a show in Lake Oswego, Oregon, and sold all three of my entries. This was a step forward for me, and I have since received recognition in several of our PebbleCreek art shows, winning first place a number of times and Jurors’ Choice once. I completed my first commissioned piece in 2021.

We became full-time residents here at PebbleCreek in 2019. I enjoy sharing time with other artists during open studio and have come to value the friendships that are forming. I have found my “tribe!”

You are invited to view Thula’s artwork on display at the Creative Arts Center and at the Tuscany Falls and Eagle’s Nest Clubhouses.