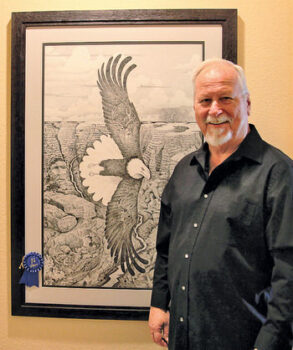 The Art Club is delighted to award Artist of the Month for December to Gary Kotula.

Gary was born in Michigan and exhibited a tremendous talent for art at an early age. Detroit is where Gary began creating technical illustrations for Fisher Body and Chrysler Defense. Several years later, he transferred to logo and package design.

Captivated by the beauty of the Southwest, Gary fulfilled his vision by moving to Arizona in 1986. He started drawing western characters and desert landscapes and found his niche, where he continues to pursue his artistic talents.

During an 18-year stint at Rawhide’s Western Town & Steakhouse, Gary drew caricatures for the guests. He continues to draw caricatures for corporate events, such as for AAA Arizona, many private get-togethers, and as gifts for anniversaries and birthdays. His flexible style allows him to customize the style of the drawings based on the preferences of the venue or the individual person.

In addition to drawing caricatures, Gary is a skilled fine artist, specializing in pen and ink. His lifelike portraits of cowboys, animals, and re-enactors appear overwhelmingly real. Gary’s fine art has been displayed in several businesses around Phoenix, including Bill Johnson’s Big Apple Restaurant, the Walz & Weiser Saloon at Kierland, Rawhide Steakhouse & Saloon, Ben’s Art Gallery in Prescott, as well as many private residences.

Gary has won several awards at the PebbleCreek Art Club’s shows, including two first prizes for drawing, the Judges’ Award for Professional Excellence, and an honorable mention.

We hope you find time to enjoy Gary’s work, which will be displayed this month in the Creative Arts Center and at the Tuscany Falls and Eagle’s Nest Clubhouses.