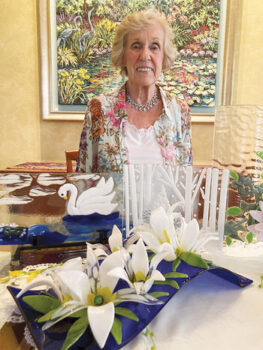 Barbara was born and raised in the Chicago area, where she attended school, grew up, got married, and had three beautiful children. She has one son who remains in Chicago and two daughters who live in Wisconsin. She also has eight grandchildren and one great-grandson.

Barbara and her husband, Ross, owned a dairy company (Joe & Ross Milk and Ice Cream), which they started in 1964. The company is a wholesale distributor, and they are thriving! Barbara was a stay-at-home mom, raising children, yet still worked for the company doing the books and communications. Today their company is third generation.

When Barb and her husband were thinking about retirement, they looked at many places and settled on PebbleCreek. They moved here in 2002 and were one of the first homes to be built at Eagle’s Nest. When they moved here, hardly anything was here. They were very drawn to the golf courses, and Barb belonged to the Rolling Pebbles, which was a women’s traveling golf group. They traveled all over the country representing PebbleCreek and had way too much fun!

Barb and her husband have traveled extensively all over Europe, Australia, Greece, and Alaska, with her favorite place to visit being Italy. Their plans include a trip to Northern Italy when things settle down around the world.

Barb’s interests include golf, traveling, mahjong, Hand and Foot, Mexican Train, and other recreational games. Barb joined the PebbleCreek Glass Art Club in 2008 when it was quite new. She took a class and has been creating beautiful pieces since then. You can see her awesome work in our display case (look at those flowers!). Her art is also displayed in the Gallery and is for sale. Stop by and check it out! 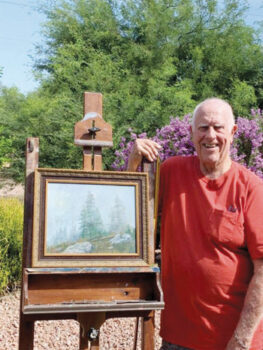 The Art Club is delighted to award Artist of the Month for November to Thomas Gallob.

Tom’s interest in art began in high school, when he took a course in architecture. That interest took a back seat while he was in the service, where he trained in computers. Upon discharge, he joined IBM.

Ten years later, he returned to school to earn a degree in industrial design. He started designing cabinets and furniture, and, soon, with the support of his wife, Judy, woodworking became not only his passion but his occupation.

For 30 years, he focused primarily on furniture but also designed custom cabinets and furniture, using only wood and natural materials. After their five children left the house, they built a house with a large woodshop and studio in Cave Creek.

In Cave Creek, his studio was featured in the annual Hidden in the Hills Studio Tour, hosted by the Terra Vita Art Club.

The Gallobs moved to PebbleCreek seven years ago. Here, he has worked in almost every art medium, including pencil, charcoal, acrylics, and oil (his favorite medium), but he feels watercolor, pastel, and colored pencils are beyond his abilities.

We hope you find time to enjoy Tom’s work, which will be displayed this month in the Creative Arts Center and at the Tuscany Falls and Eagle’s Nest Clubhouses.