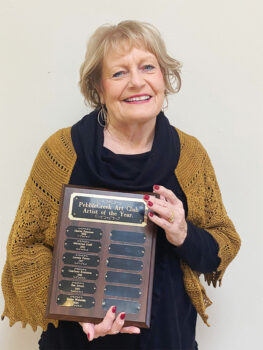 Diane Walenda is no newcomer to the art scene here in PebbleCreek, but her style of painting evolved after many years of studying with numerous professional artists in various classes and workshops.

Diane was born in Elmhurst, Ill., where she lived most of her life. Diane met her husband Bill in high school, and they have been married 55 years. After graduating from St Francis School of Nursing, Diane applied her nursing skills in the labor and delivery department at Elmhurst Memorial Hospital. She eventually became the department manager for both maternity and pediatrics, where she directed comprehensive care for mothers and children, all while being a mother herself with her own two children.

After 35 years of nursing service, Diane took an early retirement and began to focus on her love of art. She commenced taking Sunday afternoon classes at the Art Institute of Chicago, American Academy of Art (Chicago), and private lessons from other professional artists. Whenever Diane needed a night out, she would attend painting classes and workshops with a friend where she attempted many aspects of art creation and “periodically wavered between mediums of pastels, watercolors, charcoal, acrylics, and oils.”

Diane and Bill moved to PebbleCreek in 2005, and Diane quickly became involved with the Art Club. Diane’s style evolved after many years of painting. Watercolors hold a special fascination and inspiration for her.

Diane has won awards from the DuPage Art League, Addison Art Guild, the Bloomingdale Artists Association, and the Elmhurst Art Museum, as well as numerous ribbons and awards from the PebbleCreek Art Club. Diane has been an instructor many times over the years, both here in PebbleCreek as well as for the Sun City Festival. Diane continues to provide watercolor classes and inspires her students to paint with confidence while finding their own creative style.

Diane said, “When belonging to an organization, it is important to participate. I encourage PC Art Club members to volunteer and get involved in our fantastic PebbleCreek Art Center.”