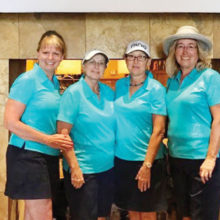 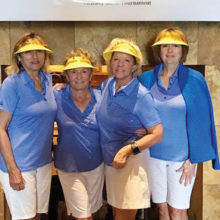 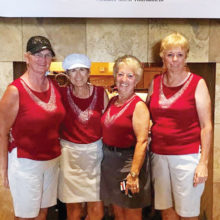 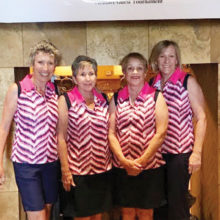 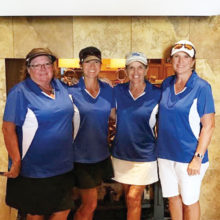 The 66 foursomes did not disappoint as they were dressed for the occasion, glistening from head to toe. On Sunday participants registered and busied themselves purchasing tickets for the raffle prizes, money tree and mulligans and playing the pari-mutuel. A brunch at Tuscany Falls Ballroom provided everyone with fuel to tackle the skills tests of chipping and putting. All of this prepared the players for playing either Hero: Two Net with Jewel Surprise per foursome on Eagle’s Nest and Corners: Two Net; Three Net on corners on Tuscany Falls over the next two days of golf. The teams were divided by handicap into six flights designated by the aforementioned jewel names.

The luncheon at Tuscany Falls Ballroom after the first day of golf was a buffet of delicious salads, during which the winners of the skills contests were announced. Following the second day of golf an awards luncheon was held at Tuscany Falls Ballroom, the entrees being a choice of petite beef tenderloin, poached salmon or veggie stuffed portabella accompanied by grilled vegetables, rice and dessert.

At the conclusion of the tournament, Golf Pros Jason Whitehill, Ronnie Decker and David Vader tallied the golf scores. Pro Ronnie Decker announced the seven place winners in each of the six flights which paid out prize money to 168 of the 264 players. Unfortunately, there is only room here to list the first place winners of each flight as follows:

Many congratulations to all of the winners of the tournament!

Thank you to Cheryl Skummer, Diane Pratuch, their committee, numerous volunteers and the sponsors who made this tournament a huge success. This tournament continues to live up to its reputation due to the dedication of the PCLGA members and the community sponsorship for which the PCLGA is extremely grateful.